The City of Marysville Adopt-A-Street Litter Control Program is an easy way for you and your group to take a direct part in creating a better, more attractive living environment in our community. At the same time, you'll gain a sense of pride from giving back to your community, while reducing unsightly litter.

Participating groups include civic and nonprofit organizations, churches, neighborhood and school groups, businesses and others. 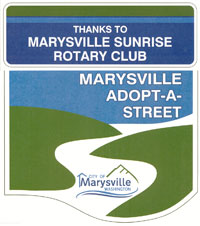 
Participating groups volunteer to remove litter from assigned sections of streets at least four times a year over a two-year period. Groups are usually asked to remove litter from at least six street blocks. In return, the Marysville Street Department at no charge posts permanent signs identifying the adopting groups and provides safety vests, hard hats and trash bags. When the bags are filled, groups leave them at the clean-up site, and Marysville solid waste collectors pick them up.

Volunteers must be at least 15 years old. To receive an application and rules describing the Adopt-A-Street program, call the Street Department at (360) 363-8100 or contact Jesse Perrault at the same number.
Sign Up for Classes
Stay Informed
Online Payments
Job Opportunities
Parks & Recreation
Police Department
[]