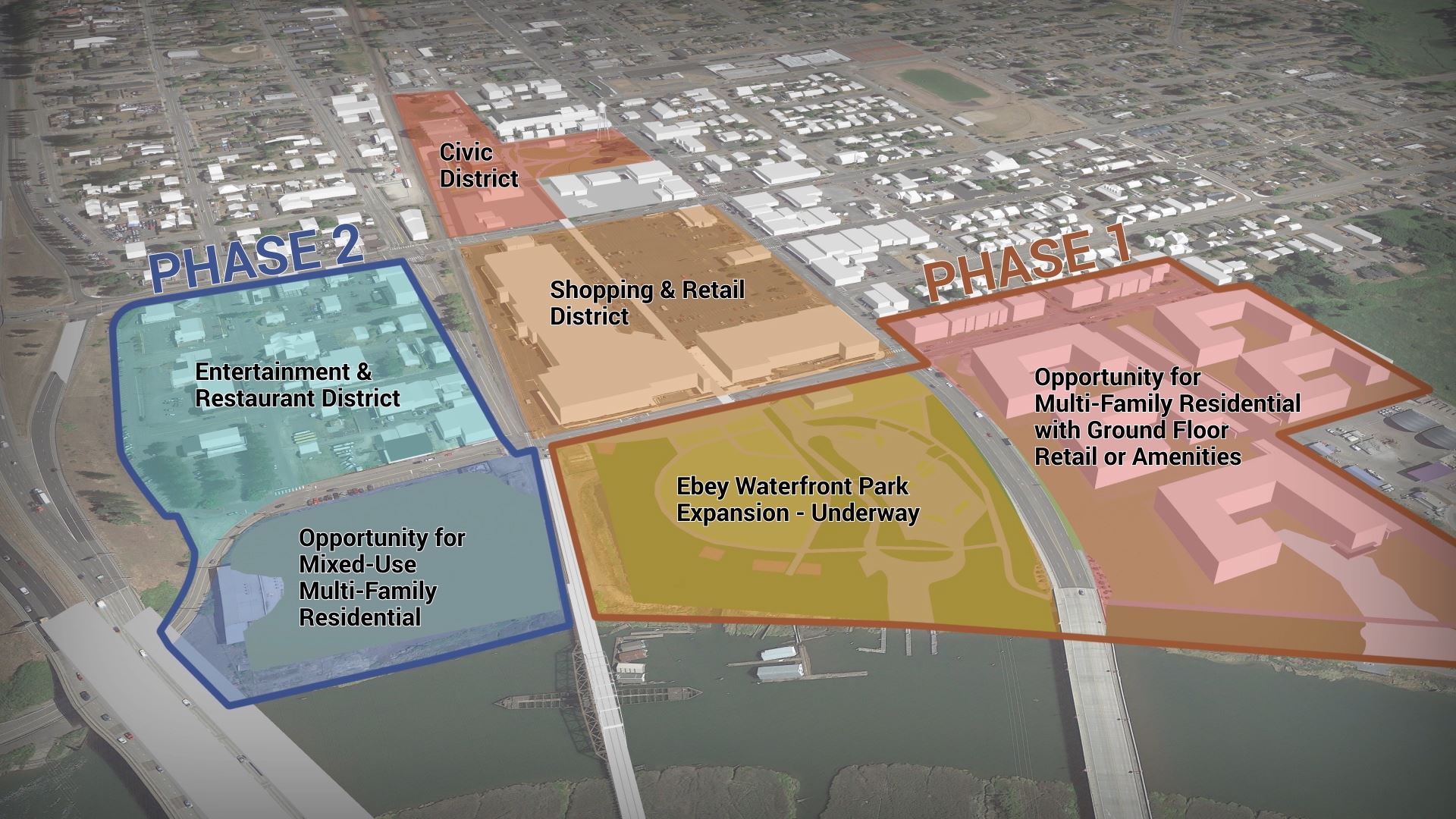 A prime development opportunity for investors

Located just 35 miles north of Seattle adjacent to Interstate 5, the waterfront neighborhood is the first look at our city for visitors driving north from King County. Transformation through redevelopment will help create a new, welcoming "front door" that will be directly served by a new I-5/SR 529 interchange scheduled for completion in 2025.

In the first phase, the city seeks potential developers and investors interested in building mixed-use multi-family residential complexes with retail and other amenities east of Ebey Waterfront Park with direct access to the Ebey Waterfront Trail.

Longer term, the west side of south downtown alongside I-5 has the potential for more multi-family and mixed-use buildings near the water. With the addition of new restaurants, shops and entertainment, this neighborhood surrounding the Marysville Opera House could be transformed into a prime visitor destination.

With partners who share our vision, we can bring new life to the place where Marysville was founded in 1891 and realize the Downtown Master Plan’s long-term vision for this area: to foster community and enhance economic vitality.

The time is right for redevelopment 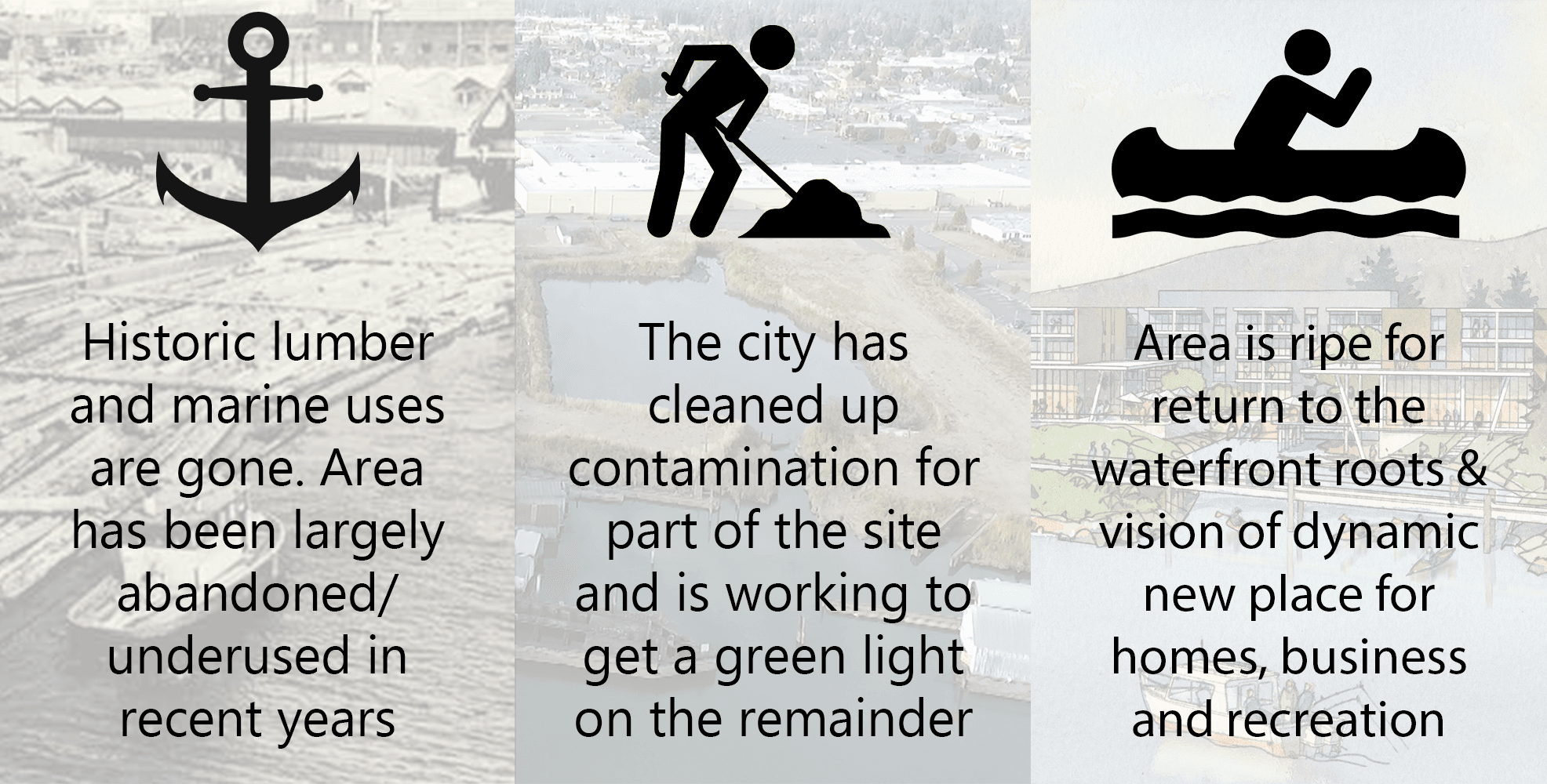 The City of Marysville, 1049 State Avenue, Marysville, WA 98270 invites interested and qualified parties to submit Statements of Qualifications for the phased development of housing and retail sites at the Ebey Waterfront in downtown Marysville.  The City is specifically requesting information about residential and retail mixed-use developers interested in the fee simple purchase of a 15-acre residential/mixed-use parcel, the lease or purchase of multiple retail parcels, and a willingness to evaluate other development parcels adjacent to the Ebey Waterfront.  After review of qualifications, the City may request qualified firms submit specific development proposals for the fee simple sale and lease of multiple development sites.  Interested parties may access the Request for Qualifications below.

Questions regarding the Request for Statement of Qualifications may be directed to directed to Gloria Hirashima at 360.363.8088 or ghirashima@marysvillewa.gov.

Planning to submit a Statement of Qualifications?  Provide us your contact information to provide notification if an addendum to the RFQ is issued.

View the City of Marysville 5-year Strategic Plan for Waterfront Revitalization, established in 2021.

The Permit Services staff process all permit applications, business and animal licenses and plan submittals.  The permit services staff offer a streamlined review process and are available to assist in answering questions.

Building Services review and inspects plans and structures throughout the city for compliance with city codes.  This also includes international building codes, plumbing and mechanical codes and electrical permit processing.

Since about 1855, loggers worked in the timber-rich hills and flats where Marysville is today. The timber industry was dependent on local creeks and waterways including the slough for transport. By 1891, when Marysville was founded, 18 logging camps were located in the area. Marysville’s first lumber mill was operational then, and mills continued to be a prominent part of local industry for nearly a century. By the 1990s, the timber industry throughout western Washington was in decline. Here in Marysville, the Interfor mill closed in 2007 and the Welco Lumber mill closed in 2008.

The City of Marysville bought the Welco site in 2008 with a long-term vision of redevelopment. Two years later, the city bought the adjacent Geddes Marina. Today, the city owns 24 parcels in the waterfront area, some of which is available for private development.

Over the past decade, the city has worked to clean up decades-old contamination in the area. The city also has made numerous investments in storm water, water and sewer infrastructure to support planned development. Currently the city is working to obtain No Further Action letters from the Department of Ecology, remediate the remaining contamination, and further prepare the site for development.

[Sources: Reflections of Marysville: A Pictorial History, The Marysville Globe]